Sign up for the latest news and offers from Spike’s and receive 10% off! 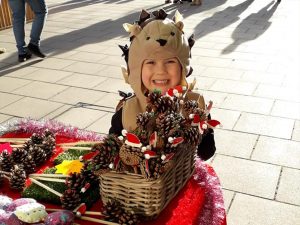 Our Hedgehog Hero for March is six year old Charlie! Charlie has been helping raise money for his local hedgehog rescue since the age of 4, with the help of mum, Lucy. Lucy tells us more about Charlie’s fundraising and his love for hedgehogs:

You must be really proud of Charlie being so enthusiastic about helping hedgehogs from such a young age, can you tell us how he first got involved with Help for Hogs?

Charlie loves all animals so when our local hedgehog rescue, Help for Hogs, advertised for volunteers in early 2018, I contacted Sue at the rescue and asked if I could volunteer with Charlie. Sue and Clive have been running Help for Hogs since 2015 and they were keen to have Charlie participate. However with him being only four at the time, he couldn’t get involved in the standard day-to-day volunteer work. Knowing he was eager to be involved, Sue suggested Charlie help clean the outside water sources and check and replenish the feeding stations. It was from there his love for hedgehogs grew.

Can you tell us about Charlie’s fundraising efforts?

Charlie often asks Sue and Clive questions about the hogs. He’s inquisitive about the world around him and likes to find out how and why things happen. He quickly became very knowledgeable about the work carried out at Help for Hogs and became particularly interested in the spring when the baby hogs started to appear at the rescue.

The rescue centres have Brinsea TLC Incubators but these are quite expensive for a small self-funded rescue. Charlie decided he wanted to help buy one. Our wonderful friend, Claire James at The Pedlars Tray in Hereford, helped Charlie come up with the idea of selling hedgehog pencils made with pine cones to raise money. Charlie began to sell the pencils in our village and at The Pedlars Tray.

With the hedgehog pencils being such a success Charlie took his efforts to the Shobdon Food and Flying Festival and managed to raise £133! Charlie also attended and sold pencils at an event at The Children’s Bookshelf book shop in Hereford, where Author Rosie Wellesley read her books about Isaac the Hedgehog. 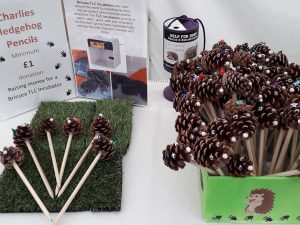 Through all of his efforts, Charlie was able to purchase a small Brinsea Incubator that can be set up in a vehicle and taken out on rescues, giving the hogs the best chance to recover. He was also able to purchase a much larger Brinsea Incubator which provides a warm, clean, quiet, safe and controlled environment. This gives orphaned babies and sick hogs the best chance to recover and thrive.

Where does he get his enthusiasm for helping others?

Charlie is a very caring child who loves nature and the world around him and that’s what drives his passion for hedgehogs and animals in general.

What does Charlie love about hedgehogs?

Charlie thinks hedgehogs are very cute. He loves the way they move around and the sounds they make. Their spikes remind him of dinosaurs- like a stegosaurus!

What advice do you have to those wanting to get involved in helping hedgehogs?

Rescues are always in need of volunteers at the centres or with fundraising. Hedgehogs were placed on the red list for British Mammals in July 2020 meaning they are now classified as vulnerable to extinction. Help for hedgehogs is needed now more than ever. Everyone can give a helping hand by putting holes in their fences, creating feeding stations and having awareness of foods that can cause hedgehogs issues (such as sunflower seeds, peanuts and oats, which can give hogs metabolic bone disease). Hedgehog houses and wildlife-friendly planting can also help hedgehogs thrive in our gardens as well as removal of any hazards.

Following your local rescue or the BHPS on social media is beneficial if you want to raise awareness and provide support. Volunteering is massively rewarding and a great way of boosting your mental health!

What does Charlie have in the pipeline to help hedgehogs?

Charlie is currently fundraising for a new microscope that will help identify nasties such as lungworm, roundworm and fluke. The hedgehogs can then receive the necessary treatment before they are released back into the wild. When we went into the first lockdown in 2020 and all of the shows and events were cancelled, Charlie began to sell rainbow-coloured hedgehog pencils outside of our home, with £1 from every pencil going to the NHS. The pencils are now on sale at Bartestree Stores in Hereford.

What does Charlie see himself doing when he is older?

Charlie wants to be a doctor, a vet, a palaeontologist or a biologist when he is older. He also has a passion for art and would love to be an artist. If he could, he would become all of the above!

Well done Charlie for all of your hard work, we’re proud to have you as our Spike’s Hedgehog Hero for March!

It's mating season. Soon little hoglets will be arriving!